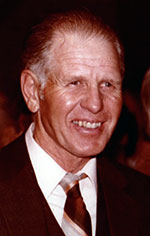 Bill was born October 22, 1923 in Fossil, Oregon to James and Nettie McGilvray Dyer. During his childhood, he was raised on his family’s dry farm near Fossil. From an early life he was always spending time riding horses and causing a ruckus with his siblings. Immediately following his graduation in 1942 from Wheeler County High School, Bill enlisted into the United States Navy during World War II as a radioman third class; serving his country until 1945.

After returning to Oregon, Bill worked as a Barber in Condon, Oregon. After 2 years of working as a barber he began rodeoing throughout Oregon, Montana, and Idaho. While at a Rodeo in Montana, Bill met Claudene Blattner. They were later married in Arco, Idaho on July 10, 1952.

He joined the Ironworkers Local Union 732 and worked as an ironworker until his retirement. In 1965, Bill and Claudene adopted and welcomed their only son, Jerry, into their life.

Bill was a member of the Atom Busters Riding Club in Arco. He enjoyed team roping (even after losing a thumb), riding all rough stock, and calf roping. Bill taught several of his great nephews and nieces how to rope and ride a horse.

Surviving is his wife Claudene Blattner Dyer of 68 years; his son Jerry Dyer, and many nephews, nieces, great nephews and nieces. He is preceded in death by his parents, James and Nettie Dyer; siblings, Gerold Dyer, James Dyer, Ariel Dyer, Agnes Dyer, and Phyllis Dyer.