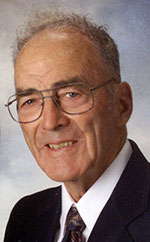 Wendell Hurst Tew, age 93, of Leslie, Idaho passed away peacefully March 25, 2020 after a very short illness surrounded by his wife, Marjean, and their children having lived his entire life in Leslie, Idaho.

Wendell was born February 7, 1927, on a cold winter day, to Bird & Lillian Hurst Tew at their home in Leslie, Idaho.

He attended grade school in Leslie in a two room school with four grades in each room. He attended Mackay High School. He was a good student and also was their star basketball player his senior year. He also played basketball for Ricks College.

He was born and grew up in the depression and at a young age he learned to work hard to help with the family survival. He learned how to solve problems as he helped his father move many houses and other buildings in the Lost River Valley.

He married his sweetheart, Marjean Armstrong, also from Leslie, Idaho, June 24, 1952 in the Idaho Falls Temple for time and all eternity. They are parents of four sons and three daughters.

He was a member of the Church of Jesus Christ of Latter-day Saints and served a mission for the church in the Eastern Canadian Mission. Later in life, he and Marjean served a mission at the Cove Fort Historical Site in Central Utah.

After beginning their marriage in an 8’ x 10’ log cabin they built their dream home a mile from Leslie and created an oasis by planting hundreds of trees and bushes, grass and flowers on two acres of their farm ground. This has been a great place for their children and grandchildren to play and for family reunions over the years.

He was devoted to his family and enjoyed taking them on outdoor adventures of camping, hiking, horseback riding, fishing, climbing ‘the butte’ and also attending their sports events.

He enjoyed hunting with his sons and extended family and especially retelling the hunting stories over and over. He also enjoyed singing and accompanying himself on his guitar and even playing the harmonica while playing the guitar.

Wendell provided for his family as a distributor of Watkins and Shaklee products in the rural areas of Eastern Idaho from Salmon to Richfield and Idaho Falls. He also supervised sales people in these areas.

He and Marjean enjoyed traveling to faraway places including Australia, New Zealand, Scandinavia, Russia, Alaska, Europe, England, Turkey, Greece, Italy, Spain, Mexico, Guatemala, Hawaii, islands of the Caribbean as well as the New York and Seattle World Fairs and many places in the U.S.

He was a man of principle. He was committed to being honest and treating others with respect. He served selflessly in the Church of Jesus Christ of Latter-day Saints as a faithful home teacher, member of the stake presidency, high counselor, bishop, ordinance worker in the Idaho Falls Temple and stake patriarch. As bishop of the Leslie Ward, he was committed to give the young men the opportunity to become Eagle Scouts as there had been only one Eagle Scout in the ward to this time. He succeeded, as 50 boys have achieved this rank. Wendell was awarded the Silver Beaver for his role in scouting.

He had a phenomenal memory of his early years and entertained his family telling stories of life on the farm and life during the depression. He also had a strong knowledge of the Gospel of Jesus Christ and the Scriptures. He memorized many passages that he remembered until the end.

He showed strong character in his last 30 years by continuing to do what he loved while dealing with peripheral neuropathy. He showed courage enduring this trial up to his death.

He was preceded in death by his parents, three sisters, two brothers, one son (stillborn) and one great grandchild.

A small family service was held under the direction of the Anderson Family Funeral Home March 28, 2020 with Bishop Bryce Woodbury officiating. Wendell was buried in the Lost River Cemetery. A memorial service will be held in his honor at a later date.