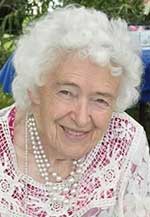 Velma was born in, Coltman, Idaho, to Joseph Rasmussen and Dora Simmons Rasmussen but raised in Ucon, Idaho. She was one of ten children born into a loving family, many of who have passed on and have been waiting to welcome her home.

Velma attended Ricks College. She married Lawrence Ervin Christensen. Together they owned and operated Vel-Lar Floral which they started in Ucon. Velma and Lawrence also worked for City Floral in Idaho Falls. Later, they moved to Shelley, partnering with Halls Floral, creating Hall and Vel-Lar Floral. Together Velma and Lawrence raised their eight children until the untimely death, of Lawrence (age 48) and their youngest son, Max Alden (age 5) in a horrible train/van accident. After their deaths, Velma eventually purchased Hall’s portion of the business changing the name once again to Vel-Lar Floral. Later, her brother Kenneth joined her in the business and helped for many years. Velma also began painting again eventually teaching evening classes to the community inside her business.

After all her children had grown up and out in the world with growing families of their own, Velma met and married Lynn Metcalf, a widower, and farmer in Moore/Leslie, ID, There Lynn introduced Velma to her new additional family of four adult girls, their spouses, and growing families. Following her marriage to Lynn, Velma closed her floral business and moved to the Leslie area just south of Mackay, Idaho.

Velma was active in the Church of Jesus Christ of Latter-Day Saints throughout her life which was highlighted by a mission with Lynn in her later years.

Velma was a wonderful gardener and talented artist who continued to paint, teach others, and exhibit many of her pieces of art in local fairs. She enjoyed doing these and many other things into her nineties when it became too difficult for her to see and walk.

Funeral services will be at the Moore Stake Center on Saturday, December 4th, at 2:00 P.M. with interment in the Leslie cemetery. There will be a viewing for family and friends at the church at 1:00 P.M prior to the funeral. Services are being cared for under the direction of the Anderson Family Funeral Home in Arco.