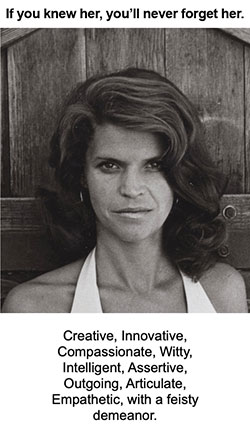 Trudy Marie Haeg, beloved wife, mother, sister, and friend, passed away at her home in Mackay, Idaho, on Wednesday, May 19, 2021.

She is survived by her husband and partner of 42 years Jeff Higley, her son Todd Haeg and his wife Siobhan Reynolds of Boise, her two sisters, Jo Anne Dieffenbach of Star, ID, and Meri Lou (Brad) Prescott of Parker, CO.

Trudy was born in Pocatello, Idaho on March 24, 1943, to Arthur William and Georgina (White) Dretke. She graduated from Pocatello High School in 1961. She married Thomas Haeg in 1962 and later divorced. They had a son, Todd.

She attended the University of Idaho, and then Idaho State University (ISU), where she graduated in 1965 with a Bachelor of Arts Degree in French and Spanish. She began teaching French in the Pocatello School System while continuing her education at ISU. She graduated in 1970 from ISU with a Master of Arts Degree in English. She taught English Literature at ISU, and moved for a time with Todd, to Des Moines, IA to teach English Literature at Drake University. She returned to Pocatello to continue teaching, where she periodically taught troubled children, a role she found particularly rewarding. She was immensely proud of her French language students at Franklin Junior High for winning several state competitions and trophies.

As her career progressed, she raised Todd as a single mother. She took great pride watching him graduate from college with an Aerospace Engineering degree, become a Naval Aviator, Helicopter Pilot, and eventually retire as a Commander in the United States Navy.

In 1978, Trudy changed careers, and began working at the Naval Reactors Facility (NRF) at the Idaho National Engineering Laboratory. It was there she met her future husband, Jeff. At the time she was a Recruiter in the Human Resources Department, traveling all over the country to recruit professionals and engineers. Concurrently, she created and taught courses in technical writing and professional development for management staff. She enjoyed organizing company Christmas parties, summer picnics, and golf tournaments. Later in her career she became one of the first female managers at NRF, taking a position in the Administrative Services Organization.

In 1990, Trudy and Jeff left NRF for positions at the Rocky Flats Plant in Colorado near Boulder. Trudy worked there as an Occurrence Reporting Manager, retiring in 1998.

Trudy and Jeff returned to Idaho in 2000 where they built a house north of Mackay with views of Mt. Borah. Trudy loved designing the house and overseeing the construction. She kept busy taking care of Jeff, the house and the rest of the “estate”, and her dog and cats.

In 2002, Trudy suffered a brain aneurysm while at home. She survived and recovered, but it made life challenging. She met those challenges with the same grit she had displayed her entire life. She and Jeff were very thankful for the care she received over the years from the medical professionals in Mackay, Arco, Idaho Falls, and Pocatello. They saved her life more than once and took great care of her.

Trudy was a prolific reader who enjoyed learning, teaching languages, and writing. She enjoyed all types of music from the Eagles to Rachmaninov, and Elvis to Led Zeppelin. She also liked singing and played the piano. She loved animals and the dogs and cats she had throughout her life. She enjoyed travel, having visited destinations all over the US and many locations in Europe, the Caribbean, and Mexico.

Her family is thankful to have had Trudy in their lives this long and Jeff will never forget that she made him at least twice the man he was when he met her.

The family will have a memorial get together on Tuesday, September 28th in Pocatello at the Sandpiper Restaurant from 5:00 to 7:00 pm. We would like to invite anyone who remembers Trudy to stop by and share a memory.

Please give to your local animal shelter in lieu of a gift, flowers or remembrance.