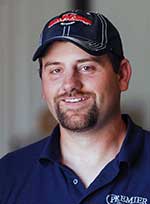 Travis Cole Roche of Mackay (Chilly), Idaho passed away in Chilly, Idaho from a work-related accident on May 16, 2022, at the age of 39.

Travis was born in Blackfoot, Idaho on May 6, 1983, to Vernon Douglas Roche and Cecelia Joanne (Coates) Roche. Travis grew up on the family ranch in Chilly, Idaho. Travis was a hard worker and spent many hours changing pipe, moving and calving cows, putting up hay, and many other farm-related tasks. During his childhood, Travis enjoyed rodeoing, showing steers at the fair, hunting with his dad, brother, and friends, and playing basketball and football. Travis attended Mackay Elementary and Mackay JR /SR High School. He graduated from Mackay High School in 2001.

Throughout high school, Travis participated in high school rodeo, FFA, football, and basketball. Travis excelled in high school rodeo and won various district titles and the District One All-Around in 2001. His senior year he served as the Mackay FFA Chapter President. Travis was a member of three state basketball championship teams and four state football championship teams. He was selected to multiple all-conference and all-state basketball and football teams. Travis enjoyed high school and was surrounded by great friends.

After high school, Travis attended ISU and later became a journeyman electrician and master electrician. He worked for C&R Electric and Premier Technologies before he started his own business, Trail Creek Electric. Throughout his career, Travis developed many friendships that helped shape his life and he cherished those friendships.

On May 19, 2005, Travis married his high school sweetheart, Crystal Hatch, in the Salt Lake City, Utah temple. Travis and Crystal lived in Carey, Richfield, and Blackfoot, Idaho before moving back to Mackay in 2015 to work on the family ranch and Trail Creek Electric. While living in Blackfoot, Travis and Crystal welcomed Cooper Cole and Maylee Jo into their family. Wes Wiley completed Travis and Crystal’s family in 2016. Their family enjoyed many camping and hunting trips, rodeos, basketball and football games, dance recitals, spring breaks in St. George Utah, gathering firewood, singing old country songs, and branding season.

Travis was a faithful member of the Church of Jesus Christ of Latter-Day Saints and was currently serving as the Bishop of the Mackay, Idaho ward. He also served on the Lost River Highway Board and as a sales representative for McKay Livestock. Travis was a kind and fun person, and he was good at serving others. Travis and Crystal worked extremely hard together on the ranch and Trail Creek Electric and they set a great example for their children, family, and friends.

The family would like to thank all their family and friends for the support given to them during this difficult time. A special thank you to the Lost River EMTs that responded to the accident, and to Travis and Crystal’s friends for putting the irrigation pipe together and hauling cattle. Your help means more than you will ever know.

In lieu of flowers, donations can be made for their children at the US BANK in Mackay.