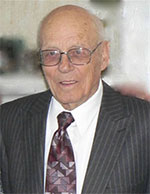 Tilford Eugene McAffee born June 3, 1924 to Samuel Maurice McAffee and Matilda Anena Olsen. He was number three in a family of six. Two older brothers Jack and Gerald welcomed him into the family and he was followed by three sisters, Merle, Vida and Nadine. Life was hard back then but as a family they made the most of it.

With the exception of the last 9 months, his entire life was in the Lost River Valley. For a short period of time he lived in Mackay and Alder Creek but the largest balance of his life was in Darlington. He loved the Lost River Valley and the good people that live there. He was once asked ‘Gene what are you going to do in life?” He said have 12 kids & 24 dogs. He came close to having both. He was a proud veteran of WWII and was honored to serve his country in the Navy branch of the military. Following his service in the Navy he was a missionary for the Church of Jesus Christ of Latter-Day Saints, serving in the Northern States Mission.

Following his mission, he met and fell in love with the most beautiful girl in the Lost River Valley. On June 12, 1952 He married Shirley Tibbitts for time and all eternity in the Idaho Falls Temple. They are the parents of 4 sons & 6 daughters. He farmed with his brother Jack for a time then went to work for the Atomic Energy Commission which is now the INL. He was on the survey crew for many years and ended his working career of 36 years on the Site as a Reactor Operator at PBF.

Dad & Mom owned and operated the Darlington Store for nearly 20 years. Dad was a faithful disciple of Christ and served selflessly in many capacities in the church including Bishop of the Leslie Ward. He and Mom served two missions and many years as ordinance workers in the Idaho Falls Temple. They cherished those memories and the many friendships they built together.

Dad passed away on Sept 15, 2019 in his son’s home in Idaho Falls with many of his children at his side. He was preceded in death by his wife, parents, brothers and sisters. He is survived by all ten of his kids, Gene (Cindy), Maurice (Debbie), Shirlene (Paul), Flint, Janice (Todd), Caroline (Kent), April (Mel), Lanell (Carl), Ivan (Shauna) & Shellie (Jim), 32 Grandkids and 42 great grandkids.Funeral services will be Saturday, September 21, 2019 at 1:00 pm at the Church of Jesus Christ of Latter-day Saints, Moore Stake Center. A viewing will be from 11:30 til 12:45 one hour prior to service. Interment will be in the Hillcrest Cemetery under the direction of the Anderson Family Funeral Home.