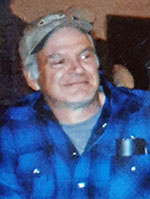 Thomas Hejtmanek passed away November 20, 2020 in Howe ID. He was born March 5, 1955 in Blackfoot to Florence (Frey) and Thomas Hejtmanek of Arco. He was raised in Arco but spent a great deal of time at the family farm in Howe, eventually making it his home.

There is no service due to Covid-19.

Tom married Sandy Thompson of May in 1979 and became a father to Weston in 1980. They were divorced in 1981. He married Barbara Callaghan in 1986 at Horseshoe Bend ID. They made their home in Howe for 34 years.

Known by many as a hay hauler, Tom was foremost a farmer. He could look at a rundown farm and see what it would take to make it a productive piece of land. He produced wheat, malt barley and alfalfa hay as well as feeding out Holstein steers. In later years he focused on Holstein heifers, continuing to haul hay to throughout eastern Idaho.

In retirement “twisting bolts” was his focus. He would find rundown John Deere tractors and restore them to like new condition. His preferred projects were 4020 tractors. At the time of his death, he had well over 100 tractors completed.

He was preceded in death by his parents. He is survived by his wife Barbara of Howe, sister Florence (Reed) Holverson of Idaho Falls and Susan (Kleal) Hill of Arco as well as his son and one grandson Jaden of Moore. He had one nephew Kirk (Charlotte) Robertson of Arco and one great nephew (Rueben) two great nieces (Kassidy and Maranda) of Arco.

In lieu of memorials, please donate to Lost River Ambulance.

Cremation services are being cared for by the Anderson Family Funeral Home.