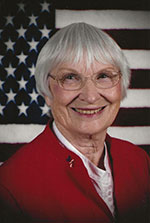 She was blessed by the birth of three children, two daughters Shanna and Drienne, and a son Gustin. Her son preceded her in death from cancer at the age of six years. She had six grandchildren, seventeen great and three great, great grandchildren. The late Ferry Henry Larter was her father and her mother was Mabelle (Luthy) Larter.  She has one brother Gary Larter, sister-in-law Marion, and a son-in-law John Yost husband of her daughter Drienne.  Daughter Shanna from Washington State. Her friend Sharon Huff, who Sharron considered and loved the same as a sibling, lived with the Larters in her early years and was always as close as a sister. And her therapy dog Jake.

Sharron was raised on a cattle ranch about twenty miles above Mackay at a place then called “Chilly.”  This created a passion for the love of all animals, wild or domesticated and she owned several horses in her lifetime. She was blessed to have a Border collie dog, Jake, and the two of them were registered as a “Therapy Dog” team. They visited rest homes and the people loved their visits and petting the dog. Sharron was brought up to respect all animals and cruelty to animals upset her deeply.

The Larter and Luthy families are gifted with artistic abilities and literary works. This gift has carried through their generations. Sharron wrote and published six books, The Truth Sayers, In Search of Sarina, Hound’s Fate, Got Your Back, Sir, and Fears Friend plus her own life story Mission Possible.  These books may still be available on Amazon. Sharron and Sharon, along with another friend, together the three published a book called Wondering about Wildflowers?

To celebrate the turning of the century back in the year 2000, she produced and directed three plays and renewed the old Valley Varieties, and proceeded to do a children’s Valley Varieties.

As a child Sharron joined the 4-H ranks and as an adult became a leader. For several years, she taught baking, cooking, sewing and art to the young people who were about the same age as her own children. Some in Mackay may remember her for that art project. She had a heart for youth and led a club of about 20 young people by creating projects to keep them busy.

Her education started in a one-room country school in Chilly, Idaho. In the latter part of the fourth grade, with consolidation of the country schools, she rode the bus from her ranch home to the Mackay schools. She graduated from Mackay’s eighth grade and Mackay’s high school. Later, she worked as a rider for the cattlemen’s association, a receptionist/secretary, and eventually taught “English as a Second Language” at the College of Southern Idaho.  She was an ordained minister and pursued and eventually earned a Doctorate in Ministry and a Masters in World Missions.  To earn these degrees she had to serve in foreign countries and so served in Mexico with Revs. Michael and Geraldine Carey under the auspice of the International Church of the Foursquare Gospel and West Africa under Romine Ministries out of Vancouver, Washington. In Mackay she attended the Cowboy Church.

Sharron gave fourteen years of her life, raising approximately $100,000 to build a veteran’s memorial that today may be seen at the Land of the Yankee Fork State Park, a deserving tribute to our military veterans of Custer County. Also, in the LYF museum are 52 albums she wrote with the military stories of Custer County people who served our country. A celebration of Sharron’s life will be held later in August. Details to be announced. We love you Sharron, you will be missed.