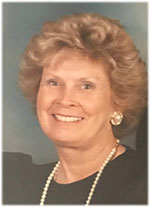 Sharron married J.C. Hansen of Moore, Idaho in 1955, they were later divorced.

Sharron met Donald Ray Genter when she was living in Southern California and they were married in May of 1963.

Sharron worked for Ken’s Catering in Southern California and later began working for Disneyland where she was able to provide her family and friends many fun memories at the “Magic Kingdom”.

Sharron was a member of the Church of Jesus Christ of Latter Day Saints.

Sharron was proceeded in death by her beloved husband, Don R Genter, her parents, her sister Diana Moss and 2 granddaughters.