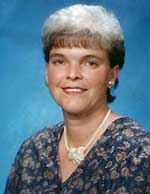 Sharon Lavon Holden, 64, passed away on October 14, 2021 at the Idaho Falls Community hospital, after a difficult battle with Covid 19.

Sharon and Jerry were sealed for time and all eternity in the Idaho Falls temple.

Sharon and Jerry moved to Mackay, Idaho. Sharon loved hunting, fishing, and camping. She loved the outdoors. Sharon continued living in Mackay until she passed away.

Sharon’s family would like to thank the doctors, nurses, respiratory therapists, CNA’s, house keeping staff, etc. for the great care that they provided to Sharon, and how kind they were to her family.

Private family service will be held and announced at a later date. Services are being cared for by the Anderson Family Funeral Home.