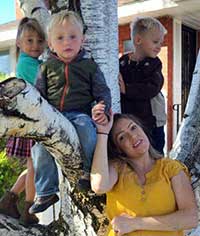 She was born October 26, 1988, in Bountiful, Utah to Gary Lynn and B’Linda Brinkerhoff Dover. Samantha was raised and received her education in West Bountiful, Utah and Lovell, Wyoming. She enjoyed knitting, crafting and was extremely patriotic.

On December 1, 2012, she married Jason R. Anderson in the Billings, Montana Temple. They were blessed with three beautiful children, Annika, Dexter, and Malachi.

Samantha attended Austin Kade Academy in Idaho Falls. She was foremost a mother that loved her children dearly. She was a member of the Church of Jesus Christ of Latter-Day Saints.

Funeral services will be held Saturday, October 29, 2022, at 1:00 P.M. at the Church of Jesus Christ of Latter-Day Saint Ward building, 1450 Mountain View Lane, Idaho Falls, ID. The family will visit with friends for one hour prior to the service at the church. Arrangements are under the care of the Anderson Family Funeral Home in Arco, ID.