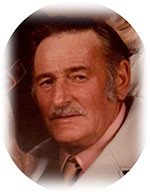 Russell Kent Hanks, 93, passed away peacefully at his home in Darlington, Idaho on August 26, 2020.

He was born March 5, 1927 in Shelley, Idaho to Dell and Blanche Munsee Hanks. Kent, as he was known by his family and friends, was a character and enjoyed life to the fullest. At the age of 14 years old he and his family moved to the Lost River Valley where Kent lived his entire life. He attended school at the Pass Creek Schoolhouse with 12 other students until his completetion.

In 1945 Kent was drafted and served his country for two years in the Army. He was a switchboard operator on the battlefield and experienced the trials of war.

In 1975 he met and married the love of his life Virginia Holmquist. They made their home in Jerome, Idaho for a short time before moving to the Lost River Valley in 1979. They lived in Darlington where Kent ran the family farm and worked for the Lost River Highway Department to provide for his growing family.

Funeral Services will be held Monday, August 31, 2020 at 11:00 a.m. at the Mt. McCaleb Cemetery in Mackay, Idaho under the direction of the Anderson Family Funeral Home. Military Rites will be rendered by the American Legion Joe Nowacki Post 16 in Mackay. The family ask that you please bring your own chair if you attend the services.