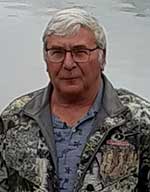 Rudy Jay Owings passed away peacefully in his Happy Place, the mountains, on July 20, 2022, at Summit Creek Campground, in Custer County.

Rudy was born October 12, 1955, to Stan and Hilda Owings in Gooding, Idaho. He grew up and went to school in Pocatello, Idaho, and worked on the family sheep farm in Muldoon, Idaho.

In 1973 he joined the USMC and served during the Vietnam War. He was a Sergeant and Crew Chief of a CH-53D Helicopter. He was honorable discharged in 1985. After being discharged from the USMC he worked for Bowing Aircraft for about 7 years.

Rudy returned to Idaho to help with his parents and be close to family. He held down miscellaneous work until he moved to Arco in 1998.

Rudy worked for Merlins Service Station from 1998-2006. In 2005 he met and fell in love with his soul mate, Yvonne Johnsrud. They were married in April 2006. Shortly after he was offered a work opportunity with U-haul. He held the position of Area Field Manager- District Certifier. He retired in 2017.

In 2018 the family returned to eastern Idaho and in May of 2022, he came back to Arco- the place he called home. It was his gateway to everything he enjoyed. Fishing, hunting, and camping.

He is survived by his wife, Yvonne Owings, of Arco, a daughter Brandi Lee Owings, and a son Benjamin Josiah Owings.

He is preceded in death by his father Stan, mother, Hilda, sister Rita Owings, and brother Randy Owings.

Per Rudy's wishes, there will be no services held. A celebration of life and ash spreading will be held at a later date.

Cremation services were cared for by the Anderson Family Funeral Home.