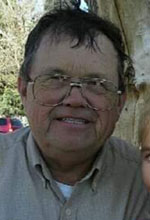 Roy served in the military as a chemical warfare specialist to which he graduated in the top 10 of his class. He was also a member of the Free Masons for many years.

Roy was close to his brothers John and David Viles. John had taken care of Roy in the last days of his life and was honored to do so. Surviving are two children; Rose A. Viles and William E. Viles. He was a hero to his grandson Anthony B. Viles, who he adopted in 2001. Even though Roy was his grandfather, Anthony always looked up to Roy as his father. Roy also had a granddaughter, Vardella R. Viles, who he cherished with all his heart.

Roy was a great man who always did his best to do the right thing. He was and still is a hero to many. He was a rare breed that loved and cared deeply for his family.

In his last days, Roy said, "as long as you remember me, I'll always be around". With that we ask that all that knew Roy remember the man he was and pass his memory onto others.

Funeral Services will be held Sunday, March 24, 2019 at 1:00 pm at the Barton Cemetery. Services are being cared for under the direction of the Anderson Family Funeral Home of Arco.