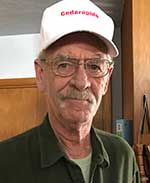 Rickey (Rick) Frank Yancey was born on February 5, 1945 in Sacramento, California and died on July 18, 2020 of lung cancer. At the age of three months he was adopted by Blaine and Fern Yancey. His childhood years were spent in Atomic City, Arco and Moore, Idaho. His schooling began in a one room schoolhouse in Atomic City. He said the teacher would have to check for rattlesnakes before letting the kids out for recess.

Rick was a hard worker and was a truck driver for most of his working career. He went back to school and earned his Associates Degree from Idaho State University in 1986 and made the Dean’s List.

Rick married Cheryl Scroggins in December 1995 in Boise, Idaho. He persuaded Cheryl to move to Arco in 2008. He was supposed to retire but chose to keep working until he could work no more.

Rick was known as Papa Rick to the many kids that passed through his life. The grandkids all have memories of camping and fishing with Papa Rick. He provided chocolate milk, Cheetos and popcorn to the kids enrolled in Cheryl’s daycare. He had a gruff exterior but those little kids could see right through him.

Rick enjoyed gardening, bird watching, and feeding the squirrels. When he was too weak to walk outside he would direct his wife to make a peanut butter sandwich for the squirrels.

Rick was preceded in death by his parents and his granddaughter, Maleeka Alazae Yancey. He is survived by his wife, Cheryl Yancey, a son Jeff Yancey, and his daughter, Alison Yancey. He is also survived by numerous, grandkids, and a few great grand children.

A Celebration of Life will be scheduled for a later time.