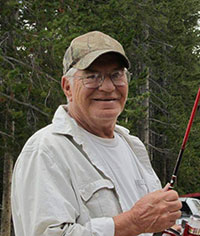 Paul Eugene (Gene) Nelson of Arco Idaho passed away peacefully at his home on October 6th 2020.

Gene was born July 29th 1943 in Pocatello to Orlin and Florence Nelson. Gene lived in the Pahsimeroi Valley until he was in the 4th grade, then the family moved to Mackay, Idaho.

He loved the outdoors and grew up hunting and fishing with his brother (Wayne), father (Orlin), and Grandfather (Blackie Woods). In high school he loved to play football, during his senior year he broke multiple school records. Upon graduating from Mackay High his football jersey was presented to him by his coach (Nolan Sayer) and his number 10 retired.

In 1968 he married the love of his life Mary Beth Overturf. They had 4 children; Scott (Teddee), Holly (Doug), Paul (Suzanne), and Jason (Theresa), and multiple grand and great grandchildren.

Some of Gene’s fondest memories were hunting, fishing, and golfing with his wife and children.

Gene was preceded in death by his parents, a brother, and a sister.

A graveside service will be held at the Mount McCaleb Cemetery in Mackay, Idaho on Saturday the 10th of October at 2 PM. We miss you and love you Dad.

All services are being cared for by the Anderson Family Funeral Home.