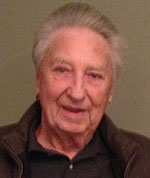 He was born October 5, 1935 in Price, Utah to Francis Earl and Wilamuth Rhoda Smithson Robinson. Paul was raised and attended schools in Salt Lake City,Utah.

On July 11, 1961 he enlisted in the United States Army where he was served in Washington State and France. He was honorably discharged on June 21, 1963.

Paul was a Journeyman Boilermaker and welder by trade which took him to jobs all over the west. He enjoyed fixing things and was an accomplished welder.

He met the love of his life Jeannie Cummins. They made their home in Idaho where Paul continued working as a boilermaker until his retirement.

Paul enjoyed boating, water skiing, car racing, playing with his grandchildren and bingo. He was a member of the Church of Jesus Christ of Latter Day Saints.

He is survived by his wife, Jeannie Robinson; his sons, Guy, Dennis and Lynn; sister Earlene, 7 stepchildren and many grandchildren and great grandchildren. He was preceded in death by his parents, 3 brothers and 3 sisters and 1 stepson.

Funeral Services will be held Saturday, January 25, 2020 at 1:00 pm at the Anderson Family Funeral Home in Arco. A visitation will be held for one hour prior to the service. Interment will be held in the Hillcrest Cemetery in Arco with military rites provided by the Harland Clendenin VFW Post 7137.