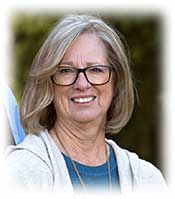 Pamela Ann Patterson Rogers passed away peacefully from this life surrounded by her family on February 9, 2022, at 5:50 pm MST, and joined ranks with the angels. She was a beloved daughter, sister, wife, mother of 7, grandmother of 39, and friend to many. She will be greatly missed by all who knew and loved her.

Pam was born July 13, 1950, to Wesley and Venna Patterson became little sister to Patricia (Patti) and was raised in Salt Lake City, UT. By her telling, the two sisters were best friends despite their age difference. When her family moved into their home on 2772 Pamela Dr in Cottonwood, she quickly made friends. To enable easier access to her friend’s home her father made a special set of stairs to cross the backyard fence. She possessed an engaging, kind, and affectionate personality and always sought to bring others happiness. She developed an interest in plants and gardening and worked for a time at a local garden center as a young adult.

She met and later married Wallace “Gary” Rogers on June 4, 1968, in the Salt Lake City Utah Temple. She was a kind and affectionate spouse. They began their life together with hopes and dreams of having a family which began a year later with the arrival of Clinton Wesley. Six others followed in time, including Matthew, Colin & Christopher (twins), Afton, Anna, and Evan.

Within a few short years of marriage, the couple decided to move their family from Utah to Idaho. First to Murtaugh, then to Challis, and finally to the Moore area where they built their dream home together. Once in Idaho, the couple chose to farm and then ranch as an occupation following a path Gary learned as a youth spending summers in Utah’s Uintah Basin. It was a hard-living made even harder by starting from scratch, but they persevered and made a go of it. It proved to be a good environment for raising their growing family. Her kind demeanor as a mother enable her to mold her children with love. She never raised her voice or disciplined in anger. Never guilted or shamed. She was always safe to talk to and confide in without judgment.

While in Challis, Pam pursued an interest in working in the medical field—first at a chiropractic office, then at a medical office. She further pursued this path obtaining a Nursing degree and working as an x-ray technician at Lost River Hospital in Arco.

During her life, she and Gary filled their time with work, family, and service within The Church of Jesus Christ of Latter-Day Saints. Following retirement, they were called to serve a proselyting mission in the Detroit Michigan Mission, and then as temple ordinance workers in the Idaho Falls Idaho Temple.

It is hard to fully capture in words the contribution of one elect lady during her sojourn on earth. To her family she was everything. She loved each one and treated them as if they were each her favorite. They were the treasure she chose to pursue and cherish. She loved getting together as a family and spending time with each of her kids, their spouses, and grandkids. She enjoyed gardening, fishing, painting, sewing, crafting, cooking, and sharing meals together. She enjoyed gift giving and could never wait to have recipients open on the designated event. She found joy in seeing them open when she was present. When others were near, she was always present.

Following an auto accident in 2006, she suffered from some limitations even after therapy which hampered her mobility and caused her severe pain. Though she will be missed, she is now free from pain and sorrow. If she were here, she would ask all to remember the happy times and keep moving forward.

She is survived by her sister Patti (Randy) Lindsey, husband of 53 years, Gary, her 7 children and 38 grandchildren, and 1 great-grandchild (she’d want each one listed):

Funeral Services will be held Monday, February 14, 2022, at 12 ~ noon at The Church of Jesus Christ of Latter-day Saints ~ Moore Stake Center. A viewing will be held Sunday evening from 5 to 7:00 pm at the Anderson Family Funeral Home and for one hour prior to the service at the church. Interment will be in the Leslie Cemetery. For all of those who can not travel to participate in the funeral, the funeral will also be live-streamed through zoom.