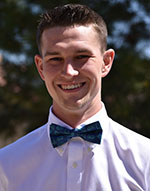 Nathaniel Stewart Dando, or as his friends knew him, “Dando,” entered into rest Sunday evening, 1 March 2020 in Kuna, Idaho. He was born 28 January 1998 to Ross Stewart Dando and Teresa Lee Hansen, in Nampa, Idaho. He was their third child and only son. And what a son he was!

Nathaniel was all boy. He loved to work on cars with his dad and was often found asleep with a car in each hand where he had been racing them. He would set up car displays, or dirt bike or dinosaur vignettes around the house in every available space and took great pride in their ownership. All his life he could identify cars from miles away, sometimes just by hearing the sound of the engine. He amazed his family at age 2, when he pointed out a “Jane Car” (VW Beetle) and he was always right!

He cared deeply for others, especially his family, and made great efforts to make them feel special and loved. He loved to spend time with his older sisters and never missed an opportunity to tease his little sister Natasha. Following his parents divorce, he always kept his cell phone with him to check in on his mom and make sure she was safe and taken care of. Throughout his life he sought to take care of his “mama” as he loved to call her.

Nathaniel attended grade school at Ronald Reagan Elementary School in Nampa, Idaho. He was baptized a member of the Church of Jesus Christ of Latter-Day Saints in 2006.

In 2009 he moved with his mother and younger sister to Arco, Idaho, where he thrived on the easy access of hunting and dirt biking out his back door. He attended Butte County Middle School and High school. During his time at Butte he participated in sports, running track and cross country at the state level, playing football and basketball in middle school, and football his senior year. Dando, as he liked to be called, loved to be physically active and challenge himself. While living in Arco he got his first dirt bike, opening the door to a life-long hobby. He worked on his bike and rode whenever he was able. Nathaniel earned his Eagle Scout Award and graduated from Butte County High School in 2016.

Following graduation, Nathaniel moved to Kuna, Idaho, where he lived with his father and attended College of Western Idaho. He graduated with his Associates Degree in Machine Tool Technology in 2019. During his time at CWI and following graduation, he worked as an operator and was later promoted to be a programmer for Rekluse Motor Sports, a favorite high performance dirt bike clutch manufacturer. He loved designing and working on parts to make the ride better! Nathaniel loved to be outdoors, hiking, camping, and hunting. He and his girlfriend Cassey Stone loved to ride dirt bikes and explore the beautiful mountains throughout Idaho together. They were both active in the dirt bike community.

A funeral will be held Thursday, March 5, 2020, at 11 AM at the LDS Kuna East Stake Center, 8625 S. Linder Road, Kuna, Idaho. Funeral services will be held the following day, Friday, March 6, 2020 at 1:00 PM at the LDS Chapel in Arco, Idaho, following which he will be interred in the Lost River Cemetery in Butte County, Idaho. Services are being provided by Anderson Family Funeral Home in Arco, Idaho.