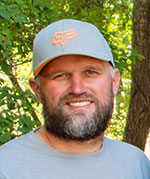 Miken entered into rest April 27th, 2019. He chose to be at home surrounded by loved ones after fighting a brutal battle with cancer. His family admires his courage, strength, and determination to “fight til the end.”

Miken was born in Twin Falls, Idaho on June 20th, 1980, to Hal and Cindy Jardine. He graduated from Butte County High School in 1998 where he participated in football, rodeo, and welding. He was employed at Fluor Marine Propulsion as a crane mechanic at the time of his death.

Miken possessed an extreme work ethic that was second to none. He was a “JACK” of all trades including master tow truck operator, welder, mechanic, etc. Miken was known to be able to build, tow, park, or fix just about anything including building his own home, a variety of trailers, hitches, and several wood burning stoves. Miken had a passion for engines and the outdoors. He loved to ride snow machines with his buddies, motorbikes with his family and friends, and go camping up a dirt road. His greatest joy in life was being a devoted husband and father. Miken left many legacies for his daughters, one of which was kindness. He always believed in standing up for the underdog and taking care of people. He is survived by his wife of 16 years, Sheila Jardine, and his five amazing daughters (Emily Reese, 13; Hayley Shay, 11; Jesse Kate, 8, Maggy Mae, 5; Miley Marie, 5) parents Hal and Cindy ;Jardine of Arco, Idaho. Four sisters: RobbiAnn (Chris) Baxter of Boise; Nanette (Luke) Allen of Twin Falls, Barbara (Trevor) Andersen of Moore, and Janni (David) Gaskins of Ridgeville, South Carolina. Two brothers: Tony (Marianne) Jardine of Twin Falls, and Brian (Amy) Lima of Summerville, South Carolina. He is also survived by many nieces and nephews. Miken is preceded in death by his grandparents Worth and Roma Jardine of Arco, Idaho, and Larry and Arlene Crouch of Elko, NV; his aunt and uncle Gaye and Don Powell of Montezuma, Iowa; aunt Joyce (Richard) Ousley of Las Vegas, Nevada; uncle Marvin (Deanna) Jardine of Arco, Idaho; and cousin Brandon Powell of Moore, Idaho.

In lieu of flowers, please consider a donation to East Idaho Credit Union. An account has been created under Sheila Jardine to assist Miken’s beautiful daughters in the future.