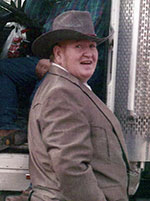 Mike was born January 18, 1951 in Idaho Falls at Sacred Heart Hospital the third child to Joseph Grover and Clara Mae O’Maley. He was raised in Howe but spent a few years in between Idaho Falls and Nampa before returning to graduate from Butte County High School in 1969. After High School he joined the National Guards and went to boot camp at Fort Campbell Kentucky returning to Clyde to drive school driving school bus and custodian at Butte high school.

He meet his future wife while driving school bus because her feet where cold and the best heater was behind the driver (lucky dad). He married Peggy Lee Spraker December 1, 1973 in Mountain Home Idaho where they lived for a short time before moving to Meridian then Nampa where Peggy went to college and Mike milked cows. In March of 75 they moved back to Howe in the middle of a Blizzard to work for the Harrells Farm. In 76 while still working for Harrell’s  Mike bought his first and forever home in Howe where all three of his daughters were born and raised.

During his life Mike worked for himself farming, Harrells farm, Russell Mays Trucking (many times throughout the years), Butte County Road and Bridge, Scott Whitworth, and finally Mike O’Maley Trucking doing what he loved hauling cows, hay and flat bedding. He was a hard worker but in 2014 he was forced to retire do to kidney failure.  In 2016 he was fortunate to receive a kidney transplant and with the support of family, friends and the community he was able to recover and return to trucking for the last year of his life.

Mike never met a person who remained a stranger for long always willing to help and dragging strangers home. He loved his family and especially his grand children he spent countless days with them riding four wheelers, teaching them to drive, watching their activities and taking them in the truck (He always had a grandchild with him). He took his three girls all over (how we survived is beyond us)it was always an adventure/learning experience.

Mike is survived by his wife of 45 years Peggy daughters Michelle (Terry), Amanda (Cody), Jennifer and grandchildren Abigail, Amber, Justice and Lane.  Brother’s Patrick (Juanita), Timothy (Kathy), and Sister Carrie Ann, mother-in-law Carolyn Jensen and several nieces and nephews. Proceeded in death by his parents and baby sister Molly.Funeral services were held at 11:00 a.m Saturday, April 6, at the Howe community center with family visitation at 10:00 a.m. Interment was in the Howe Cemetery with luncheon to follow.