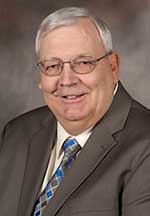 Our beloved husband, father, and “Papa”, Michael Leslie Orr, went to heaven on December 21, 2021, following a massive heart attack, which led to an automobile crash north of Howe, Idaho. He was born on December 26, 1952 to William L. and Beth (Thornock) Orr in Pocatello, Idaho.

Mike always lived life to the fullest. How do you summarize such a life? He grew up in Pocatello, spending many hours roaming the hills outside of town with his friends. Some of those friends remained close throughout his entire life. He earned his Eagle Scout at a young age, and spoke often of working on staff at Camp Tendoy (BSA) as a 15-year-old. He served a two-year mission for the Church of Jesus Christ of Latter-Day Saints after one year of college. He served in the Florida South Mission, and remained friends with some of his fellow missionaries throughout his life.

In 1975 he married LuAnn Barthlome and shortly thereafter moved to Soda Springs, Idaho, where he was first introduced to the fertilizer industry—from the ground up! He also worked construction and poured concrete foundations during those years. He “worked ambulance” as a volunteer EMT and saved a few lives along the way. He loved the area, because it afforded him the opportunity to hunt and fish at the drop of a hat! They had two beautiful children, Jarred Michael and Chandra Lucille. He and LuAnn divorced in 1982.

In 1983 he met and married the love of his life, Alene Carole Nannenga. Together they had two more beautiful daughters, Hailey Anne and Kara Lynn. They had 38 wonderful years together. They spent much family time camping, hunting, fishing, and traveling, both with their children and their 7 grandchildren. He loved his Savior and held many callings in the church, most recently 4½ years as Sunday School Gospel Doctrine teacher. That man knew how to teach!

After a brief stint in the sprinkler business, Mike had decided to go back to Idaho State University, where he earned a Master of Science in Microbiology/Chemistry. He then entered the fertilizer industry working in the lab for the J.R. Simplot Company. He moved on to become Technical Consultant, traveling to locations across the USA, Canada, Mexico, and even as far as China. He left Simplot to begin his own consulting firm in 2007. He sold the business in 2013, which allowed him to finally retire from travel! He had logged over 2 million miles with Delta!

He then turned his full attention to family and community service. He served a little over 4 years as a member of the Pocatello City Council, where he met and made many new friends. He and Alene spent the last 4½ years living in Howe, Idaho—close to their “camp” and all of the outdoor adventures they loved.

As they say in his favorite movie, “That man really lived!”

He is survived by his wife, Alene; his daughters, Chandra (Ty) Andrew, Hailey Anne Clark, and Kara (Kevin) Brady; and his sweet grandchildren, Ryndon and Hudson Andrew, Tucker, Kimber, and Kade Clark, and Dawson and Sawyer Brady.

He was preceded in death by his parents, William L. Orr and Beth (Thornock) Orr; his brother, Wesley Lyman Orr, his son, Jarred Michael Orr; a niece, Yvonne; and a nephew, Gerald.

The family received family and friends at the Anderson Funeral Home in Arco, Idaho on Tuesday, December 28, from 5-7 PM. The funeral was held at the Howe LDS Chapel at 1 PM on Wednesday, December 29, with a viewing which began 1 hour prior to the service. The service was also available on Zoom, https://zoom.us/j/98886335059?pwd=WjVjWW9qSzdLOERRWDZnSkVXTlRxZz09

The family wishes to express their heartfelt thanks for the outpouring of love and support they have received. In lieu of flowers, donations may be sent to the Lost River Medical Center Foundation, Arco, ID.