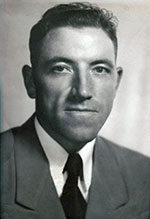 Melvin Carl Lemmon passed to the next life on June 26, 2020 surrounded by family in the home of his son and daughter-in-law in Lehi, Utah. Melvin was born to Mary Ella Parker and Richard Suprise Lemmon in Mackay, Idaho on April 6, 1918. Over the course of his 102 year life, Melvin witnessed history that included the 1918 Spanish flu, World War I, World War II, the roaring twenties, the Great Depression, and the pandemic of 2020.

Melvin was named after Melvin Jay Ballard, an apostle of the Church of Jesus Christ of Latter-Day-Saints. His mother passed away after giving birth to a baby girl when Melvin was two years old. He was raised in a log cabin outside of Mackay, Idaho in an area known as Pass Creek. He lived and worked at the family saw mill from 1928 until 1941. When he and his older brother, Lawrence were not working in the saw mill they enjoyed exploring the mountains of the Lost River range. Melvin was proud to proclaim he climbed Mount McCaleb and Mount Borah.

Melvin attended school in the Lost River area through the 8th grade. At the age of 23 Melvin moved to Ammon Idaho to attend high school. After three months of high school, he was drafted into the United States Army. Although he never earned any educational degree, he took it upon himself to read and study and all that knew him considered him well educated. He had beautiful penmanship, was a master of the English language, and had an analytical mind.

Melvin loved his country and served in World War II from 1942 to 1946. He also served three years in the Army Reserves. He was trained as an Army medic but because of his beautiful penmanship he was recruited to write reports and correspondence.

In 1946 Melvin met his future wife while working in Kennewick, Washington. After a long-distance courtship Melvin married Joyce Despain of Lovell, Wyoming on April 22, 1949 in the Idaho Falls, Idaho temple of the Church of Jesus Christ of Latter-Day Saints. They settled in Mackay, Idaho and took to heart the commandment to multiply and replenish the Earth. Together they brought into the world and raised nine children. His posterity has since blossomed into 48 grandchildren, 107 great grandchildren, and three great-great grandchildren. After 102 years of life and 71 years of marriage, Melvin always considered his marriage and family to be among his greatest accomplishments. His family was a source of great happiness.

Melvin spent most of his career working for the Idaho Nuclear Engineering Laboratory as a warehouse foreman. He retired in 1982 after working over 30 years. All who worked with him considered him to be very dependable, loyal and kind-hearted.

Melvin was a faithful member of the Church of Jesus Christ of Latter-Day Saints. He served as a bishop’s counselor, a Sunday school teacher, and Ward Clerk for three bishops, as well as several other callings. He and his wife served as missionaries in the California, San Jose Mission for 18 months. Melvin had unshakable faith and devotion to God.

As a child, Melvin knew both hardship and joy, and throughout his life, he chose to see the good in people and situations. Hard work was a way of life but Melvin always found time to admire the wondrous beauty of God’s creations. His work ethic earned him the respect of his fellow men. His family cherishes the memories created with him, including tractor rides, gardening, hiking, playing horseshoes, singing (he played a mean harmonica), the Round Swing, his embellished stories (both true and semi-true), the homemade wrist rockets (AKA “flippers”). Melvin was a patriot, devoted family man, and a disciple of Jesus Christ. He had a warm sense of humor and saw the good in humanity.

The family would like to thank the employees at Abbington Manor, and Bristol Hospice, especially, Steve, Paula, Annika, Billie, and Valerie for their attentive and loving care.

Funeral services will be held at the Anderson Family Funeral Home in Arco, Idaho on Friday, July 3 at 11:00 AM. Family will be available to greet visitors before the service from 10:00 AM to 10:45 AM. services will be streamed and may be viewed online from Mel Lemmon’s Facebook page - https://www.facebook.com/mel.lemmon. A grave dedication will be held at Mount McCaleb Cemetery in Mackay following the funeral service at 1:00 p.m. Visitors are also welcome to join the family at the Cemetery. In lieu of flowers, the family suggests donating a fast offering to help those in need or contributing to the church humanitarian aid program or missionary.

Given the current landscape with Covid and the number of high risk individuals that will be present, please take necessary precautions if you plan to attend live.