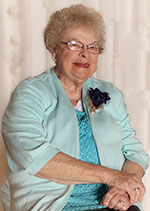 Marylyn Lee Pancheri, 80, passed away at her home in Howe, Idaho on Sunday, June 20, 2021 surrounded by family.

She was born March 5, 1941 in Klamath Falls, Oregon to Everett Eugene and Elenora Dorthea Johnsen Metler. Marylyn spent her youth in Klamath Falls where she attended school, graduating from Klamath Falls High School in 1959. She was active with ballet and dance and taught dance through her high school years. She met the love of her life, Jerry Pancheri, while he was serving an LDS mission in Klamath Falls, Oregon. She then attended the University of Utah in Salt Lake City, Utah. They dated after his mission while he was finishing his degree at Utah State University. While at the University of Utah she won the Miss Airborne and competed in the Miss Utah contest where she placed.

On June 15, 1960 she married Jerry Lee Pancheri in the Idaho Falls Idaho Temple. They made their home in Swan Valley, Idaho, Osgood, Idaho, Ririe, Idaho and eventually moved to Howe, Idaho where she resided until her passing. She and Jerry worked hard to provide for a growing family and instilled in her eight children the value of hard work. She was a wonderful mother and homemaker.

Marylyn was a member of the Church of Jesus Christ of Latter-Day Saints. She served in various callings throughout her life in the Relief Society and Primary. She enjoyed gardening, cooking and serving others. She served as an EMT and used her talents to make quilts for loved ones and donated many to Primary Children’s Hospital.

A special thanks to all the doctors of Idaho Kidney Center and Brittney Wright Anderson of Solace Hospice.