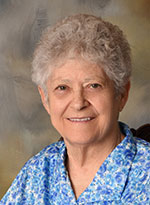 Mary Louise Borrowman, 82, of Arco, passed away Thursday, May 20, 2021 at Tierra Rose Hospice in Salem, Oregon. Mary Lou’s passing follows the loss of her husband, Ed Borrowman, in November of 2017. She will be buried next to him in Rupert, Idaho on June 5th.

Mary Louise Henscheid was born in Rupert, Idaho on November 18, 1938 to William and Mary Henscheid as the 5th of 7 children. The family was very active in the St. Nicholas Catholic Church. She was born into Idaho’s first floral and nursery family-owned business and spent her childhood among flowers and vegetation of all kinds. She was active in school affairs like Girl’s League, GAA Thespians, Pep Club, Pep Band, Music Club, Ski Club, and Quill and Scroll. She wrote several plays, one being a radio script, which took first place in the state. She was also in Campfire Girls and spent summers with her sisters at Camp Neewahlu in Coeur d’Alene, Idaho. She graduated from high school in 1957.

After high school, Mary Lou spent time as a Sister Servant of the Holy Ghost of Perpetual Adoration in Philadelphia, Pennsylvania. In 1961, she earned a degree in Early Childhood Education from St. Mary’s College in Kansas, a college where many of her sisters and nieces have also received their college educations. With her love for the college, she organized and hosted her class’s 50th reunion in 2011. She had a career as a middle school teacher and taught in both Portland, Oregon and Rupert, Idaho and shared her passion for education outside of the classroom as a Girl Scout leader.

Ed Borrowman courted and married Mary Lou after they were introduced on a blind double date. They wed on July 2, 1964 on her parents’ 35th wedding anniversary and her mother’s birthday. After they married, they spent time in Fort Bragg in North Carolina, back in Rupert, and then moved to Arco, Idaho, where they spent the next 50 plus years. They raised three children and were members of St. Anne’s Catholic Church. Mary Lou loved being a stay at home mom and attended countless school events and supported her kids in many activities. Mary Lou was also known for caring for housebound seniors, being a substitute teacher, leading Cub and Boy Scout Troops, and her volunteer work with her parish. In 2014, Mary Lou and Ed celebrated their 75th birthdays and 50th wedding anniversary with a large party and trip with her siblings to Glacier National Park, all hosted by her children.

After Ed passed in November of 2017, Mary Lou was able to continue to stay in her home in Arco with the support and love of her caregivers (Nancy and Mark Fitch, Steve Pierson, Pat McDonald and Lyn Amos), her church community, the Sr. Citizens Center and Meals on Wheels. As she became more physically fragile, she moved to Salem, Oregon in October of 2020. During her last months, she had amazing and loving care at Tierra Rose, which was close to her eldest son, James, and his wife Teresa. They visited her as often as possible through windows during Covid. When Mary Lou went onto hospice, her children were able to be with her in person through the last month of her life and be present for her passing.

Mary Lou appreciated simple joys. She liked the color yellow and adored yellow roses. She also had simple wants. She was born on November 18th, two days after her two sisters’ consecutive birthdays on the 16th and 17th, and when she was asked one year what she wanted for her birthday, she said she would just like to have her very own birthday cake, which she got every year thereafter for the rest of her life.

Mary Lou is survived by four of her six siblings and three children.

The family would enjoy your company at the services to be held in her honor: