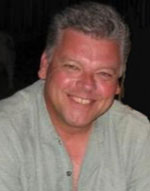 Mark Anthony Reinke was born in Nampa, Idaho, on January 22, 1964, the 6th and youngest child of Lester L. and Betty J. (Hafer) Reinke. While Mark was in grade school, the family moved to Pocatello where he attended school, including Highland High School. Mark passed due to a work-related accident east of Arco, Idaho, on Friday, February 13, 2020.

After high school, Mark worked in Arizona, where he was accompanied by his future wife, Brooke Schild. During that time, they welcomed their first child, a daughter named Patricia Brianna. They then returned to Idaho. During that time, Mark enlisted in the Navy, and he and Brooke were married. After training at Great Lakes Naval Station, Mark was stationed at and deployed from San Diego, California. During this time, Mark and Brooke enriched their family by having their second child, Anthony Loren. Mark was devoted to and in love with his family. One key memory of his time in the Navy was having his father Les, sail with him from Hawaii to San Diego on a "Tiger Cruise." This brought back memories of the Idaho camping trips the two would take when Mark was a child and teenager. Mark was honorably discharged from the Navy in 1993.

Following his time in the Navy, Mark and his family returned to Idaho. Mark worked for the Public Works Department in Nampa, Idaho. He also owned a successful construction business until 2000. The family relocated to Idaho Falls where Mark worked for Memorial Monuments and Vaults, a position wherein he placed cemetery monuments and assisted in the final resting of countless individuals in Eastern Idaho and Western Wyoming.

Eventually, Mark took a position with Schlumberger Oil Field Services, and relocated to Grand Junction, Colorado. That position led to a transfer to Williston, North Dakota, where he worked until his relocation back to Idaho. At that time, he purchased a home north of Howe, Idaho, amidst the beloved mountains where he hunted regularly. In recent months, Mark was hired as a crew member for the Idaho Department of Transportation, which he loved. He quickly established a close and fraternal relationship with his co-workers.

Mark is survived by his daughter, Brianna and granddaughter Livvy (Alivia), in Boise; his son, Anthony, from Idaho Falls, his former wife, Brooke, in Idaho Falls; and by his siblings, Betty (Jerry) Alm, Grangeville, ID, Brent (Carla) Reinke, Twin Falls, ID, Jay (Andrea) Reinke, Williston, ND, and Florence (Paul) Johnson. Buhl, ID, as well as numerous nieces and nephews. He was preceded in death by his parents, Lester and Betty, and his oldest brother, Cliff.

Mark's funeral will be held Friday, February 21, at 10:00 a.m., at Anderson Family Funeral Home in Arco, Idaho, followed by the Committal at 3:30 p.m. in Clover Lutheran Cemetery outside of Buhl, Idaho, where his parents and older brother, Cliff, are buried. A meal will follow at Peace Lutheran Church in Filer, Idaho. Officiant for the funeral and for the burial will be Mark’s brother-in-law, Paul Johnson, Pastor at Peace Lutheran, Filer. The family welcomes all to attend.

In lieu of flowers, Mark’s family respectfully requests that donations be made to the nonprofit organization benefiting the Veterans of Foreign Wars, as Mark had served his country valiantly in the Gulf War. Donations can be made at vfw.org.