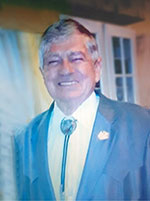 He was born February 6, 1937 in Pittsburg, Pennsylvania to Raymond and Hannah Patricia Glasser Laskey. At a young age Lowell's parents were divorced and his mother married John Laskey who raised Lowell and his siblings. Lowell dearly loved and appreciated John for being the man that he was.

Lowell was raised in Pittsburg where he received his education. Upon graduating from high school Lowell attended college in California where he graduated with a Bachelor of Engineering. During the Vietnam Era Lowell enlisted in the United States Navy serving his country with honor. Following his discharge he continued his studies and began working as a Nuclear Engineer which allowed him the opportunity to travel all over the world. He eventually moved to Mackay, Idaho where he became active in the community.

In 1961 Lowell married Carol Anne Byous, from this marriage Douglas Lowell Frauenholz and Diane Carol Frauenholz were born. Lowell and Carol moved to Mackay, Idaho in 1985 where they purchased the Mackay Mansion. Carol passed away in August of 2010. On April 23, 2016 Lowell married Mary Louise Erickson in Mackay, Idaho. They enjoyed the last few years together traveling and being active in their community.

Lowell was a member of the Catholic Church and American Legion. He enjoyed fishing, dancing & square dancing, model building, traveling and astronomy.

Funeral services will be held Saturday, September 12, 2020 at 1:00 p.m. at the Mt. McCaleb Cemetery in Mackay, Idaho. Military Rites will be offered by the Naval Honor Guard and the Joe Nowacki American Legion Post 16. Condolences can be sent to the family at info@andersonfamilyfunerals.com. Services are being cared for under the direction of the Anderson Family Funeral Home.