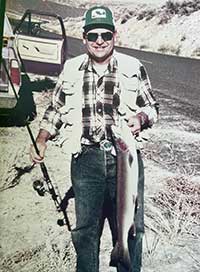 Lewis Nelson Dick passed away peacefully in his sleep January 21, 2022. Lewis was born February 26, 1937 to Mounty Nelson and Mary Margaret (Bamberry) Dick in Jerome, ID. He grew up and farmed with his family in the Lost River Valley. He owned a cow business during his high school years and sold the milk to the cheese factory in Arco. Lewis graduated from Butte High School in 1955. He joined the army and was stationed at Camp Hanford.

Lewis married Janice Christine Butler in January 1956. Their son Martin Lewis was born at Camp Hanford Washington. After the military, Lewis and Janice moved back to Arco. They later moved to Twin Falls where their daughter, Brenda Lee was born. They bought the grocery store in Mackay, ID and lived there for a couple of years. They moved to Renton, Washington in 1966 where Lewis worked for Boeing. Lewis and Janice divorced. After working for Boeing, he worked at Bar-S as a maintenance engineer for many years. When Bar-S closed, he worked for Sunny Jim, Carnation, Pederson’s, and Safeway where he retired in 2000.

Lewis married Linda Star Schukar on April 11, 1970. They were blessed with a daughter Laurie Carol. Lewis and Linda have lived in Renton, Washington for 50 years.

Every summer Lewis and Linda would vacation in Arco, ID to visit with family and to hunt and fish. He was an avid fisherman and hunter. His favorite river to fish was the Big Lost River.

Lewis was preceded in death by his parents, Mounty and Mary Dick and his son Martin Lewis Dick. He is survived by his wife Linda Star Dick, daughters Brenda (Brian) Cole, Hastings, MN and Laurie (Jerry) Cowan, Covington, WA, 9 grandchildren and 3 great-grandchildren. Sisters Mary Lee (Robert) Crump, Riggins, ID and Nancy (Alan) Oliver, Pocatello, ID. A private family memorial will be held in Arco, ID on May 29th. Arrangements are under the care of the Anderson Family Funeral Home.