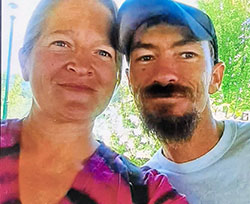 He was born August 2, 1985 in Las Vegas, Nevada to James and Ronda Lingard McDaniel. Leon was raised and attended schools in Nevada, eventually graduating from MMI College in motorcycle repair.

On February 23, 2017 he married his sweetheart and best friend, Amy Barth, in Idaho Falls, Idaho. They made their home in the Lost River Valley where Leon worked several jobs.

Leon loved the thrill of riding motorcycles and working on them. He also enjoyed camping, sharing a good cup of coffee with friends, a quiet breakfast with the ones he loved, watching the supernatural and Funniest Home Videos on TV and sitting around a campfire.

Surviving is his wife, Amy McDaniel; his step-children, Jolene Slover, Joseph Slover Jr. and MaKayla Slover; his parents, Ronda Lingard and James McDaniel; a brother, Jessie McDaniel; numerous nieces, nephews, uncles, aunts and friends. He was preceded in death by his grandparents, Ray and Linda Lingard.

A Celebration of Life service will be held and announced at a later date. Cremation services are under the direction of the Anderson Family Funeral Home in Arco.