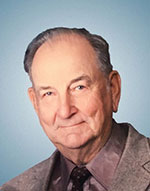 Leo Merrill (Speed) Jensen, a lifelong resident of the Moore, Idaho area passed away on June 8, 2020 at the age of 100 years.

Leo was born and raised in Moore, Idaho, the fifth child born to Joseph Edward and Laura Sophia (Sorensen) Jensen. He attended school in Moore and spent his childhood playing with his siblings and cousins, helping on the farm, and playing in the mountains. After high school, Leo continued to work on his parents’ farm until he bought his own and raised Hereford cattle. Outside of work, he continued to play in the mountains and anywhere he could find fish to catch. He loved being outside and was a great fisherman, who enjoyed the experience whether he was at the Mackay Reservoir or traveling in Alaska. He had a talent for tipping his brothers out of boats. He enjoyed picnics and going after firewood, which he continued to do until he was 89. He also enjoyed card games and always won at checkers.

He was a member of the Church of Jesus Christ of Latter-Day Saints. He was a generous man with a twinkle in his eye who took great pride in his family. In August 1972, with the blessing of her son, David Bird, he married Bonnie Nelson Bird. In March 1974, they were joined by a daughter, Gretchen.

His grandchildren thought he was a true cowboy. He always wore a cowboy hat and boots (until after he got married, and to Bonnie’s grief sometimes switched to a baseball cap), and did his work on a horse. Leo had a great love of farming, cattle ranching, and reading, especially Louis L'Amour and The Wall Street Journal. He had a kind heart and a quiet laugh.

He is survived by his wife, Bonnie, his children, David (Sherri) Bird, Gretchen Jensen, three grandchildren Adrienne (Ryan) Peterson, Dallin (Katie) Bird, and Tiffany (Jake) Hartner, along with 10 great-grandchildren. He is also survived by his two baby sisters, LaVir Knight and Marjory Babcock.

He was preceded in death by his parents, Joseph and Laura, along with his brothers Doyle, Lloyd, Glenn, Elmer, Vaughn, and a sister May.

There will be a graveside service on Saturday, June 13, 2020 at 1 p.m. in the Lost River Cemetery in Moore, Idaho. If you plan on attending, please bring your own chair.

Services are being cared for by the Anderson Family Funeral Home.