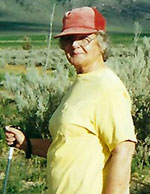 Leah Marie Nation, 91, passed away Tuesday, May, 25, 2021 at the Lost Rivers Medical Center from a sudden illness.

She was born February 3, 1930 in Red Rock, Oklahoma, the sixth child of Charles and Lola Tipton Osborne. Leah grew up during the Great Depression and learned the value of hard work at an early age. Her parents farmed so there were always chores to do.

In 1946 Leah’s parents moved to Jerome, Idaho where she graduated from high school in 1947. She began working in Twin Falls, Idaho where she met Hezzy F. Orchard. They were married later that year and made their home in Twin Falls. It was here that their first son, Alan was born. They later moved to Washington state where two more sons, Louis and Douglas joined the family. Hezzy’s work moved the family to Portland, Oregon where Patricia was born. Leah was a stay-at-home mom and took great delight in caring for her children. In 1962 Leah and Hezzy were divorced.

Leah moved to the Lost River Valley and began working at the Country Store in Moore, Idaho, and also at the Your Café. It was during this time that she met and later married Nolan Duane Nation. They were married at the Community Church in Mackay, Idaho in 1964. They made their home on a little acreage north of Moore where she resided until Duane’s passing in 1990. She sold the farm and moved to Arco where she involved herself in Spinning Yarn, working at the Golden West Café, cooking at the Lost Rivers Hospital, and later at the Lost Rivers Seniors Center. Leah also managed the Senior Center for 12 years and retired on July 1, 2014.

She was an active member of the Arco Orthodox Presbyterian Church and held the position of treasurer for several years.

Surviving are her children; Douglas Orchard and Patricia Orchard. She was preceded in death by her husband Duane and her sons Alan and Louis.

Memorial Services will be held Saturday, June 5, 2021 at 1pm at the Anderson Family Funeral Home with Rev. David Bass officiating. A visitation will be held for one hour prior to the service.