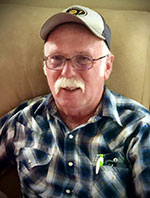 He was born June 19, 1953 at the Challis Hospital to Farris and Dorothy Wheeler. Larry grew up in Idaho Falls area where he attended schools and was active in the band playing the trumpet. He graduated from Skyline High School in 1971 and had many friends. He attended Ricks College, the College of Southern Idaho and Idaho State University. Larry was employed at State Hospital South where he was a calming and rational staff and a blessing to his patients.

Larry married Janet Andrus of Blackfoot and they were later divorced. From this marriage he helped raise Stephanie as a daughter. He was a loving father figure from the beginning.

In 1977, He was hired by the Idaho National Labortory as a laborer. He eventually went through training and became a journeymen electrician, then later on was hired as a power dispatcher, which was the current position he held. Larry was active in the INL union, and was in the union presidency. Larry was always a hard worker at the INL. It didn’t matter he would always work hard and fill a shift if needed for his coworkers. Larry was a valued member of the INL and will be missed by many.

Larry married Sherlyn (Pebbles) Thomas of Arco in 1995. The marriage brought a son, Chad and a daughter, Chelsie. They lived in Arco and later moved into a new home in Grouse (Lost River Valley), where Larry's grandparents, Lynn & Ruby Keele had ranched.

Larry was a solid provider and a loving, dedicated husband, father, grandfather and an active member of the Church of Jesus Christ of Latter Day Saints. He was taken from us far too soon, but he is with our beloved Heavenly Father. He will be missed by many due to his big heart and everlasting love.

Funeral Services will be held Friday, October 30, 2020 at 11:00 a.m. at the Anderson Family Funeral Home, 2555 N. Highway 93, Arco, ID. A viewing will be held Thursday from 6pm-8pm and for one hour prior to the service. Interment will be in the Lost River Cemetery.