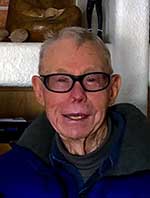 Larry Elliot Peterson was born April 4, 1935 in Hailey, ID to Deac and Florencie Peterson of Carey, Idaho; passing away March 9, 2022 in Gooding, ID, due to complications related to a recent snowmobile accident.

Larry touched many lives through his passions, his adventures, and his sense of humor. ‘Larry from Carey’ began his journey being born into a sheepherding family alongside Basque sheepherders in Blaine County which was foundational to his adventurous spirit and connection to nature. The family business instilled in him a strong sense of self-reliance which was built upon their industrious work ethic. Buying his first tractor at age 12 and his first Jeep at age 14 was both a source of pride and led to his branching out to farming to supplement sheep pasturing for his family’s business. Farming was an endeavor Larry continued throughout his life on his own land and his custom farming operations. As a young man he enlisted in the Army to serve during a period of conflict. As a paratrooper during the Korean War he was able to see the world, while serving his country. Within a few years upon return from his service, Larry married and in short order welcomed the blessings of his three daughters. During this phase of life, a good friend acquainted him with the sport of snowmobiling, which became his lifelong passion. Not only did it energize his entrepreneurialism through his ownership of a snowmobile shop in Bellevue, but it also sparked his competitive nature through racing. He was a champion rider but more important than winning races, he lived to introduce the sport to all. Larry mentored hundreds of others during his 60 plus years of being a snowmobiler.

A graveside service will be held at the Carey Cemetery at 11:30 a.m. on April 2, 2022, with a gathering at the LDS Church in Carey immediately following the service. Anderson Family Funeral Home in Arco is assisting with Larry’s final wishes.

Larry requested donations be made to his beloved senior center in lieu of sending flowers: