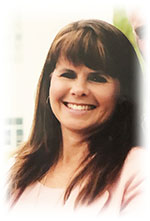 Kirsten Marcel Isham passed away with her husband and children by her side on April 1 st at 9:50PM in Howe, ID at Sunny Bar Ranch. Sunny Bar Ranch was always her earthly home and where she wanted to be most.

Kirsten was born November 28, 1963 in West Point, NY to Nicholas and Gayle Pool. She was raised as an Air Force child moving every 2 years, she lived in: New York, Oklahoma, Nevada, Arizona, California, Texas, Iran, Georgia, and Idaho. As a senior in high school, she was homecoming queen and a cheerleader for the Mackay Miners in Mackay, ID. After high school she went on to college at Idaho State University, and it was there that she met her husband, Mike Isham. He knew he was going to marry her on their first date. They met in June of 1984 and were married by December 31, 1984.

Her first and greatest love was her Lord. She accepted Christ as her Savior when she was a young girl, and she taught her children how to pray and the importance of having their own relationship with The Lord.

Kirsten enjoyed her runs and walks early in the mornings in the hills and by river. In these times, she was able to commune with The Lord and pray for her children, grandchildren, and other people The Lord put on her heart. She wanted all to know that her strength came from Him, and she wanted all to know the love and grace of Jesus. She was praising and worshipping until the very end and know she still is. We can see her singing and dancing in heaven.

Kirsten will be missed deeply by her husband, Mike, of 36 years, her siblings Curt (Danette) Pool and Nicki (Charlie) Maggart, her parents Nick and Gayle Pool, her kids, her 13+ grandkids, and many extended family members and friends. She has left a lasting legacy that will carry on for forever.

Services will be held April 8, 2021 at 11:00 AM at Watersprings Church, 4250 S 25 th E, Idaho Falls, ID. In lieu of flowers, the Isham family requests donations are made to Focus on the Family in Kirsten’s honor. Funeral services are being cared for by the Anderson Family Funeral Home in Arco.