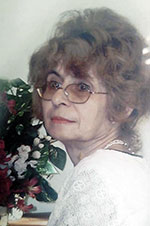 Joy Dell was born April 10, 1945, in McIntosh, South Dakota, the daughter of Dell and Tina Langerman. She lived in McIntosh with her parents and her younger brother, Lawrence (Larry) until 1954, when the family moved to Buffalo, SD. Due to summer visits for several years before the move, Joy Dell already had friends in Buffalo. One of those friends was Chuck Cammack. They were friends through the years, dated in high school, and married April 23, 1966. The couple had two children, Kimberly and Carter.

In 1971, the small family moved to Arco, Idaho, where Chuck worked for the family business, The Arco Advertiser. Joy Dell held many jobs over time, waiting tables at many of the restaurants in town. Eventually, she started selling Avon. Never one to do things half-way, Joy Dell became “THE Avon Lady,” in Arco, making rounds of the valley building friendships and selling Avon. In 1983, her hard work was rewarded with a trip for two to Hawaii. She and Chuck had a fabulous time and their trip become one of their cherished memories.

Joy Dell had many gifts. She played the piano and guitar and wrote music and lyrics. She also drew and painted. She was a great seamstress, making curtains, bedspreads, and clothes. She even sewed clothes for her daughter’s Barbie Dolls. She became interested in photography and taught herself how to use the computer programs necessary to make some amazing collages for families and friends. Then, she decided to start her own business, Visions in the Light. In addition to the photographs and special design work, she made and sold t-shirts, postcards, and magnets. Many refrigerators today still have “Number Hill Magnets” that Joy Dell made. Joy Dell’s life was filled with family and friends from all walks of life. She loved to learn about people and their beliefs. Her grandchildren, Raegan and Christopher, spent many hours listening to grandma’s stories about history and, of course, the spirit world. She was quite a story teller.

In 2018, Joy Dell lost the love of her life and partner, Chuck. She was always grateful to the family and friends who stepped in to help as she adjusted to life without him. She lived fairly independently until the fall, 2020, when she suffered a broken hip and Carter moved home to help her around the house. In February, she was diagnosed with cancer.

Joy Dell passed away March 8, 2021, at the age of 74, in Idaho Falls. She was proceeded in death by her parents and brother, and by her husband. She is survived by her daughter, Kimberly Cammack, her son, Carter Cammack, granddaughter, Raegan Carlton (Isaiah), and grandson, Christopher Lengle (Apryl).

Services will be held at Anderson Family Funeral Home in Arco, Saturday, March 13, at 1:00 p.m. Interment will follow at Hillcrest Cemetery, Arco.