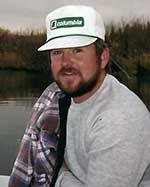 Joseph Paul Landon, 59, passed away Sunday, October 17, 2021 at his Hagerman, ID home. Joe, as his friends and family call him, was born December 26, 1961 in Idaho Falls, ID to Cleon and Thresa Landon. He spent much of his youth in Mackay, ID playing sports, working hard on his family's ranch, and spending time with his brothers and sisters on the Big Lost River. He also worked on several ranches and farms around the community. Some of his fondest memories are of working with the people around Mackay and he loved to point out barns he helped build or farms he worked on. He took pride in his hard work and cherished the friendships he made along the way.

Joe was a practical, hardworking man who could fix or solve almost any problems that were thrown at him. Not only that but he also taught people how to fix them themselves and gave them the tools they would need to do it. He worked in the mining industry for 32 years, starting out as an ore cart pusher when he was 18 at the Golden Sunbeam Mine. He worked many positions throughout his career in mining but when he retired he was the General Manager of Robinson Nevada Mining Company in Ely, NV. Joe knew almost everything there was to know about mining and was very good at what he did. Despite not having any degrees his character, drive, and hard work led him to the top of his industry. He was the “last of the Mohicans” in mining, as Teri would say. Waking up at 4am every morning he wanted to make sure he was the first one at work to greet his employees and was usually the last one to leave. His door was always open to his workers and he built many great friendships throughout his career and was invested in their success as well.

The most important thing to Joe was family. His wife Teri and him were best friends and had many adventures in their 34 years of marriage. From camping to tropical cruises they experienced a lot together and enjoyed trying new things. He loved fishing and hunting but most of all he loved spending time with his wife, family, children, and grandchildren. He taught all of them too many things to count or name and will live on through his teachings. He adored seeing his grandkids' faces light up when he showed them new things like how to fish, ride four wheelers, or when they got to ride in his tractors with him. He even played with dolls a time or two when his granddaughters begged. Joe’s smile was infectious and you could see the joy he had for life in the twinkle of his eye. He was greatly loved and will be greatly missed. There are never enough words to describe a person like Joe’s life but I believe that those who knew him wouldn’t need them anyways.

Joe is preceded in death by his father, Cleon Landon, his brother David Landon, and his brother in law Gary Coons.

Interment will be in the Mt. McCaleb Cemetery under the direction of the Anderson Family Funeral Home. In lieu of flowers or donations please just hug your loved ones extra tight today.