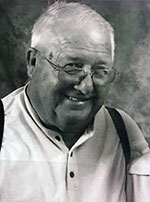 He attended school in Butte County including several elementary years in a one room building with seven kids, four of whom were relatives. The school houses were up Antelope and on his parent's farm. He graduated from Butte High School in 1955.

He married his lifelong sweetheart, Eunice Morris, in June of 1956. They were blessed with two children, Vickie Inez and John Kelly Bell.

John worked as a pipe fitter for most of his adult life at the INL Test Site. He was also the Superintendent of Installation for environmental plant clean up processes in Missouri, Kansas, Florida, Washington, California, and Canada.

He enjoyed camping and fishing with friends, particularly up Trail Creek. John was also an avid bowler, pool player, and card shark. John and Eunice spent winters at Wenden, Arizona where they formed many close and lasting friendships. He spent many hours playing cards, golfing, and playing pool. He enjoyed participating in pool tournaments with Arizona friends, while wintering there.

He was preceded in death by his parents, a brother Harold ( Jessie) Bell, a son John Kelly Bell, and granddaughter Cameron Marie Diaz.

A Memorial Service will be held in Arco at 11:00 AM Thursday, June 6, 2019 at the Anderson Family Funeral Home.