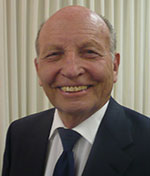 Our beloved father, grandfather, uncle, great uncle, and friend, John Bever King, passed away peacefully on the morning of March 19th at Eastern Idaho Regional Medical Center of causes incident to age. John was a friend to all and uplifted those around him, be they family, neighbors, students, or strangers. He made lasting impressions for good on all who knew him.

He was born October 19, 1929 in Moore, Idaho to Mark Kerswell and Beulah Marie Bever King. He attended school in Moore where he graduated from Moore High School in 1947.

John served in the United States Navy on active duty at various times and in various places from July 1948 through June 1971. He retired from active reserve in 1973, Lieutenant, USNR.

In 1958, he attended Brigham Young University in Provo, Utah, graduating with a Bachelor of Arts degree in German in 1960.

He taught English and Foreign Languages (German, French, Russian ) at the High School for the Shelley Joint School District from 1977 to 1990.

He spoke many languages including: English, Finnish, German, French, Russian, Japanese, and Estonian.

He was a member of the Church of Jesus Christ of Latter-day Saints. He served a mission to Finland.

In 1958, he married Josephine Hurley on March 15th. In 1977, he married Marla B. Bowen on October 8th in Soda Springs. Their marriage was later solemnized in the Idaho Falls LDS Temple. They served missions together in Finland and the Stockholm, Sweden Temple. They volunteered as clergy at the hospital.

He met and married Virginia L. Pettit Collins Hole in 2005 and together they served in many capacities for the Church of Jesus Christ of Latter-day Saints (LDS), including in their home ward, the Woodruff Ward.

He held up the light of the Savior so that he could guide others to Him. He served so many around him and and blessed the lives of people in many countries.

He is survived by his children: daughter, Valerie (Mike) Arnold of Idaho Falls; sons, Merrill J. Hulse of St. George, Utah; Rick Collins (Gail) and Craig Hole (Joanne) of Utah, Stacey Harrison, and grandchildren and nieces and nephews. He is also survived by the few fish that “got away” in Antelope Valley.

He was preceded in death by his wives, his parents, two brothers and three sisters.

A family service will be held prior to burial in the Lost River Cemetery in Moore.