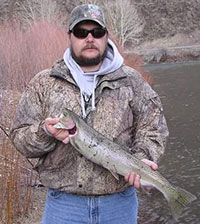 On Monday October 5, 2020 Jeffrey Kirk Edwards set off on his next adventure at the age of 53. He left us exactly as he would have wanted, in the quiet of his Arco, Idaho home next to his loving wife after a three and a half year battle with glioblastoma.

Born August 27, 1967 in Pocatello, Idaho to Joann and Jeffrey Edwards, Jeff was the oldest of three children. During his education at Pocatello High School Jeff felt the call to serve and enlisted in the United States Air Force. Following his graduation, he reported for basic training at Lackland Air Force Base. Upon completion of basic training Jeff was stationed at Fairchild Air Force Base. There he met Heather Nordal. After a year of dating, Jeff and Heather were married on February 18, 1988. They welcomed their first child, Jeffrey Nathaniel, in June of that year. Jeff also began his education at Idaho State University in their nursing program. He would celebrate becoming a Licensed Practical Nurse two years later along with the birth of their second son, Joshua David Carl. Jeremiah Kent would join the family in 1992 and Jacob William would arrive in 1994.

Nursing was one of Jeff’s passions in life. His love of caring for people led him to a 27-year career as an LPN that covered nearly every facet of nursing. He cared for hundreds of people through that time and wherever he was he brought his tireless work ethic, his quiet confidence, and his wry sense of humor. His work helped hundreds of people through the years. When Jeff wasn’t working, he was an avid outdoorsman. He hunted and fished his whole life, instilling in his sons the same love of the outdoors and the importance of conservation and stewardship.

Jeff is survived by:

His wife of 32 years, Heather Edwards.

His four sons and their wives: Jeffrey and Sydney Edwards, Joshua and Candace Edwards, Jeremiah and Mady Edwards, and Jacob and Nikki Edwards.

His siblings and their spouses: Melinda Edwards and Shelley Smith, Ron and Jeanette Edwards.

He is preceded in death by his father, Jeffrey Kirk Edwards.

As per his wishes, there will not be a funeral. A celebration of life will be scheduled and announced at a later date. In lieu of flowers, the family requests that a donation be made to Ducks Unlimited or the Rocky Mountain Elk Foundation in Jeff’s name.

Services are being cared for by the Anderson Family Funeral Home.