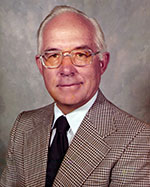 Jay Alvin Andersen, 90, passed away September 2, 2019 in Arco, Idaho. Jay was born to Jenness Willard Andersen and Arvilla Waite on October 27, 1928 in Arco, Idaho. He attended school in the Lost River School through the 8th grade and then he graduated from Arco High School in 1946.

Jay then spent 2 ½ years serving a mission in the Hawaiian Islands for The Church of Jesus Christ of Latter Day Saints. When he returned from his mission, Jay was drafted into the Army. He then spent 9 months on the front lines in Korea earning Jay enough points to come home early from the war.

Jay married Jean Pearson, June 9, 1954 in the Idaho Falls Temple. They were blessed with eight children. He completed his master’s degree in Education at ISU. The family returned to the Lost River Valley. Jay spent the next 25 years in the Butte County Schools working in various positions. Upon retirement from teaching school, Jay then decided to sell Farm Bureau Insurance. During all this time Jay and his family farmed.

Funeral Services will be held Saturday, September 7, 2019 at 1:00 pm at the Church of Jesus Christ of Latter Day Saints Moore, Idaho Stake Center. A viewing will be held Friday evening from 6:00 to 8:00 pm at the Anderson Family Funeral Home, 2555 N. Highway 93, Arco, ID and from 12:00 to 12:45 pm at the church prior to the service. Interment will be in the Lost River Cemetery.