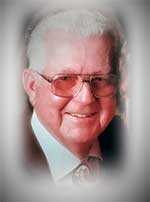 He was born April 21, 1931, in Yakima, Washington to Rucker Ware Hoover and Francis Lydia Wells Hoover. Jim was raised and received his education in Harrah, Washington where he graduated from White Swan High School. At the age of 43, he attended Treasure Valley Community College in Ontario, Oregon, and attained three Associate Degrees: Range & Ranch Management, Agriculture Business, and Crop Production.

On July 10, 1971, he married Stella JoAnn Kinkeade in the Mesa Arizona Temple of the Church of Jesus Christ of Latter-day Saints. They lived in various states as they followed his work, eventually ending up in Howe, Idaho, where he managed the Simplot Farm until his retirement in 1996. After his retirement, they moved to Moore where he resided until his death.

Jim loved working with the youth, the Boy Scouts, and serving in numerous callings in the Church of Jesus Christ of Latter-day Saints; including as a counselor in the Bishopric, High Priest Group Leader, and many other teaching positions. He also loved belonging to the Lions Club where he was involved in many service projects and leadership positions. Jim also helped organize a Gold Wing Road Riders Chapter in Arco. He loved riding his motorcycle and he and JoAnn took many trips on their bike. He loved spending time with his family, the outdoors, camping, hunting, fishing, and photography.

Surviving is his loving wife of 50 years, JoAnn; his sons, Mitch (Dottie), Chad (Kim), and Matt (Lori); his daughters, Vicki (Don), Shelli (Dean), Genine (Tommy), and "Daughter of Heart", Terrie (Steve); 21 grandchildren and 20 great-grandchildren. He was preceded in death by his parents, two sisters, a brother-in-law, and a great-granddaughter.

Funeral Services will be held Tuesday, December 21, 2021, at 11:00 a.m. at the Church of Jesus Christ of Latter-day Saints, Moore Stake Center. The family will receive friends on Monday evening from 6:00 to 8:00 p.m. at the Anderson Family Funeral Home in Arco, and for one hour prior to the service at the church. Interment will be in the Lost River Cemetery in Moore.