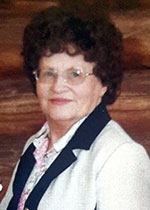 Ina Verdean Cottrell Lambert, 90, of Mackay passed away September 10, 2020 at Diamond Peak Assisted Living Center in Challis, where she had been residing for four years.

She was born in Arimo, Idaho, on February 6, 1930 to David Lawrence and Verna Parris Cottrell. The family moved to the Lost River Valley in 1936 where they purchased a ranch on Alder Creek near Mackay. Along with attending school in Mackay, Ina helped her father and grandfather with various chores on the ranch and trailing cattle. She loved riding her horse “Babe” and would often ride into Mackay on a Saturday night to take in a western movie at the local showhouse. She also enjoyed visiting her cousins in Pocatello and taking in the big city life.

On May 13, 1949, she married the love of her life, C. Boyd Lambert and to this union four children were born, Cheryl, Irene, Keith and David. Following their marriage, they lived near Darlington for a short time before moving to Mackay where they made their permanent home.

Along with raising her family and keeping house, she often accompanied her husband to Clayton, Stanley, the Pahsimeroi Valley, and to Devils Beadstead, where he made a living drilling water wells.

She was a wonderful cook, and her tender roast beef dinners, yummy taco suppers, delicious homemade fudge and peanut brittle, for which she proudly won blue ribbons at the Custer County Fair, were something to look forward to by her family.

Her favorite pastimes included reading, playing cards, solving crossword puzzles, sewing and doing embroidery, going dancing and babysitting her grandchildren and great grandchildren. She also loved to travel and enjoyed camping with her family in the nearby mountains and her favorite Yellowstone National Park. She also loved to take family vacations around the western states.

She was preceded in death by her parents, her husband, son-in-law Rick Philps, three sisters, Alta Hurst, Dorothy Edwards, and Carol Lindsay, and one brother Glade Cottrell.

She was dearly loved by all her family and will be deeply missed. She will live on in our hearts forever. Happy Trails, Mom, we love you.

Graveside Services will be held at Mt. McCaleb Cemetery in Mackay Idaho, on September 16, 2020 at 1:00 p.m. under the direction of the Anderson Family Funeral Home.

Donations can be made to the Mackay EMTs or Challis EMTs.