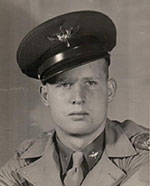 Hershel Lyle Ivie, (94) of Mackay, Idaho our father and grandfather peacefully passed away on Feb. 5, 2019 of natural causes.

Hershel was born in Mackay, Idaho August 2 1924 to Lyle Evan Ivie and Bula Frandsen. He grew up and attended schools in Chilly
and Mackay, Idaho.

On June 25, 1947 he married Kathryn Geneva Sollender in Boise, Idaho.

Hershel enlisted in the Army March 16, 1943. He served in the 507th parachute infantry regement. He was awarded the purple heart for injuries received in the Battle of the Bulge.

For the majority of his working career he owned and operated Mackay Equipment Company.

His Funeral Service will be Monday February 11, 2019 at 11am in the Moore, Idaho Stake Center of the Church Of Jesus Christ of Latter-Day Saints. Interment will be in the Mt. McCaleb Cemetery in Mackay, Idaho under the direction of the Anderson Family Funeral Home.