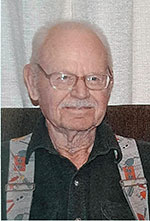 He was born November 27, 1924 in Sugar City, Idaho to William Curtis Harris and Gladys May Stewart Harris. Gordon was raised and received his education in Montana where he graduated from high school. He enlisted in the United States Navy during WWII and was stationed in the Philippine Islands during the war.

On December 29, 1953 he married Ina Mae Schmuck in Pavillion, Wyoming. They made their home in Wyoming, and Idaho as Gordon owned and operated their sheep ranches. He was a member of the American Legion for 78 years, served on the Mackay School Board and donated his time to help young people in the 4H organization. He also enjoyed watching and playing baseball.

Gordon is survived by his wife, Ina Mae Harris and his children, Sherry Pearson and husband Mike, Kirk and wife Sandie.7 grand children and 10 great granchildren. He was preceded in death by his parents; his sisters, Rowena Minor and Colleen Thorn and a brother Norman Harris.

Graveside funeral services will be held Saturday, August 15, 2020 at 11:00 a.m. at the Mt. McCaleb Cemetery in Mackay, Idaho. Military rites will be provided by the American Legion Joe Nowacki Post 16. Arrangements are being cared for by the Anderson Family Funeral Home in Arco. In lieu of flowers the family would like donations sent to the Mackay EMTs P.O. Box 37 Mackay, Idaho 83251 The family suggests that those attending the service please bring your own chair.