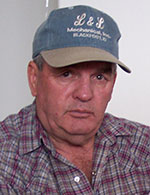 He was born January 18, 1938 in Arco, Idaho to Stanley and Vivian Combe Blattner. Garth was raised in Arco where he graduated from Butte High School in 1956. He enlisted in the United States Marines and served his country from 1956 to 1958. Following his discharge from the Marines he returned to the Lost River Valley.

In June of 1959 he married Bobbi Schureman in Pocatello, Idaho. They made their home in Arco where Garth worked hard at farming to provide for his growing family. Garth and Bobbi were later divorced.

On August 7, 1976 he married Tracie Lynn Beverland in Arco, Idaho. They spent the remainder of their years together until Tracie's passing in October of 2018.

Garth was a member of the Atom Busters Riding Club in Arco and was a teamster at the INL. He also enjoyed team roping, chariot racing, hunting, shooting trap, camping, playing cards, bowling and watching his grandchildren play sports.

Funeral Services will be held Friday, January 3, 2020 at 1:00 P.M. at the Moore Community Center in Moore, Idaho. A viewing will be held for one hour prior to the service. Interment will be in the Hillcrest Cemetery in Arco under the direction of the Anderson Family Funeral Home.