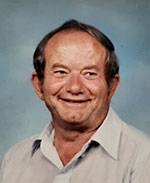 Garth Alan Powell, 79, passed away peacefully at his son's home in Pocatello, Idaho.

Garth A. Powell, 79, of Arco Idaho passed away on December 22, 2019 in Pocatello Idaho at the home of his son and daughter-in-law, Glen A. and Joni Powell after a courageous battle with kidney cancer. Garth was born on June 29, 1940, in Mackay Idaho, to Owen and Ruth Stacey Powell.

Garth lived in Mackay for about 4 years before moving to what is now the Idaho National Laboratory where his family lived until Garth was in the second grade, before moving into Arco. Growing up, Garth was a paper carrier for the Post Register. Garth took a great deal of pride in his work as a paperboy, which developed into an attribute Garth would carry throughout his life. While growing up in Arco, Garth joined the DeMolay, the younger man’s division of the Masonic Order. Garth remained active in the DeMolay for many years serving in various offices within the organization including Master Councilor. Growing up in Arco brought many fun adventures to Garth and his cousins Logan Williams, Bob Thornton and good friend James Mays. After graduating from Butte High School in 1958, Garth attended Idaho State University in Pocatello for 3-4 semesters, studying general studies as well as English Literature. Garth moved to Des Moines Iowa in ‘60-’61 where he continued his upward movement through the Masonic Order, joining the Southgate Lodge in 1960. While in Iowa, Garth also began work for Iowa Sheet Metal where his brother Don Powell was then working. Garth enrolled in a sheet metal apprenticeship program for the next 4 years. Garth became a journeyman sheet metal worker and has worked in the trade, installing duct work and servicing furnaces throughout the Lost River Valley ever since.

During his time in Iowa, Garth met and dated Susan I. Cox, and the two were married in 1963. In 1966, Garth and Sue moved to Blackfoot Idaho for a short time before moving to Arco in May of 1967, where Garth has lived ever since. Garth and Sue were blessed with a son, Glen Powell in the fall of 1967, and a daughter ReNee Powell-Perry in the spring of 1971. Garth loved his children very much and always did his best to be active and supportive of their upbringing. Garth and Sue were active in the community while raising their children. In 1980 Garth and Sue would divorce, but always remained good friends and supportive of the children they had together.

Garth would live the bachelor life for the next few years before he started dating Phyllis E. Baxter. The two were married in January of 1990. Garth and Phyllis would continue their lives in Arco, living in Garth’s childhood home where they currently reside. During this time, Garth would retire from his job as a Technical Specialist, Senior with the Naval Reactor Facilities at the Idaho National Lab after 31.826 years of service. Garth would spend his retired years continuing to support the Masonic Order, holding virtually every office, including that of District Deputy Grand Master. Garth continued to be active in community organizations and of course, service furnaces in the area. Garth and Phyllis would remain married until Garth’s passing.

Services will be held at 2:00 p.m. December 28th, 2019 at the Baptist Community Church in Arco Idaho with internment at Hillcrest Cemetery in Arco. A viewing will be offered from 12:30-1:30 prior to the service. Services are under the direction of Anderson Funeral Home in Arco. In lieu of flowers, Garth asked that donations be made to either the National Multiple Sclerosis Society, or Shriners Hospitals.