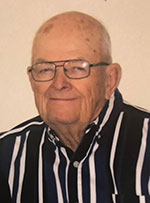 He was born February 26, 1935 in Nampa, Idaho to John Lawrence and Bertha Julia Buchta Sanford. Frank was raised and received his education in Glenns Ferry, Idaho.

In July of 1953 he began working for the Union Pacific Rail Road for a short time before enlisting in the United States Air Force in January of 1954. Frank served during the Korean War where he worked with the Crash and Rescue squadron. Upon his honorable discharge from the service Frank went back to work for the railroad. He had a long and productive career as a Rail Road Conductor for more than 45 years.

On July 11, 1970 he married Vureida Jones in Pocatello, Idaho. They made their home there until his retirement in 1999. They spent many winters in Quartzsite, Arizona where they enjoyed the many wonderful friends they met.

Frank loved golfing, fishing for salmon on the Oregon coast, hunting, raising chocolate lab dogs for bird hunting, taking pictures, riding his four wheeler, and socializing. He was known as “Nice Guy Frank” and a friend to all.