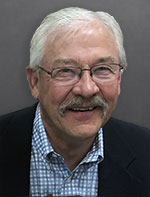 Frank was born April 28, 1945 in Blackfoot to M.D. (Red) and Betty Halverson and grew up in Riverside, Moreland and Mackay. He was a champion wrestler and calf roper at Snake River High School. When his family moved to Mackay, he lived with his aunt and uncle, Jack and Genevieve Thomas, to finish his wrestling year. Graduating from Mackay High School in 1963, he attended ISU in Pocatello, earning a BS in architecture in 1968 while working full-time, including summers with the U.S. Forest Service on Big Soldier Lookout and as a smokejumper in McCall and Idaho City.

Frank completed the ROTC program at ISU and served in the U.S. Army Corps of Engineers (1969-1979) including assignments in Germany, Vietnam, Panama and Japan. He was an Airborne Ranger-Special Forces and spoke Vietnamese. Among his awards were the Bronze Star Medal and the Meritorious Service Medal. He obtained an MS in civil engineering from Oregon State University while in the Army.

His professional engineering career started in 1979 with Corning Glass Works in Harrodsburg, KY with work in France and China. In 1988, he and Marcia moved back to their beloved Idaho where he joined Power Engineers in Hailey managing multi-million dollar projects with major US corporations. He oversaw acquisitions including in South Africa. Frank went on to become Powers’ chief operating officer and was a member of their board of directors for 26 years. He retired in April 2020.

Frank had an extensive range of interests and was a “man’s man” with a group of friends for each of his varied activities. He loved flying his Cessna with his pilot buddies; riding with his Harley pals, including Sturgis; fly-fishing around the world with yet another group of buddies; and attending reunions with smokejumpers. Hailey Coffee Co. was his morning spot to gather with local friends. Frank applied his genius engineering mind to restoring old vehicles, including a 1977 Dodge pickup and a Willys station wagon. He had a world-class garage with a lift and every tool known to mankind.

Frank was beloved by all who knew him for his intelligence, integrity and decency. His remarkable work ethic began when he was a small boy on a farm with morning chores, feeding livestock and moving sprinkler pipe-all done before breakfast and prior to boarding the bus for the 30-minute ride to school. Frank had an uncanny connection with animals, wild and tamed. While on an African safari, a family of warthogs surrounded him soliciting his touch, snakes allowed him to pet them, other people’s dogs and cats were drawn to him. Perhaps they detected his kind heart. People who worked for him were also aware of his tenderheartedness; following his passing, his wife received many communications from employees sharing their gratitude for what a kind and wonderful boss he had been.

Graveside services will be Saturday, September 26, at Noon, at the Mt. McCaleb Cemetery in Mackay. Please wear masks and practice social distancing. Arrangements are under the care of Anderson Family Funeral Home. A celebration of life will be held in Hailey at a later date.

If you wish to make a donation in Frank’s memory, please consider two local charities: Hyperbaric Health and Wellness Foundation, where he served on the board of directors; or “I Have a Dream” Foundation-Idaho, where he mentored a young student. Condolences may be sent to the family at (info@andersonfamilyfunerals.com)