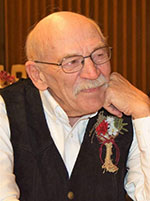 Blue was born Oct 24, 1943 in Driggs, ID to Charles Claudius Dalley and Elen Martha Wallace Dalley. He grew up and attended school in Driggs, ID where he graduated from Teton High School in 1962 and then attended college in Logan. Blue was an accomplished athlete in high school, excelling in wrestling and football.

Blue went on to serve in the 116th Engineer Batallion, 3rd Platoon in the United States Army where he served one tour in Vietnam. He was honorably discharged from the Army in 1972, but remained a life member of the Veteran’s of Foreign Wars Post 7137. Blue took great pride and was very proud and honored to serve his country.

Blue married Linda Jean Ringel on August 16, 1971 in Elko, NV. They made their home in Driggs, ID. He enjoyed hunting, fishing, trapping, camping, rock hunting, panning for gold, gardening, and had a special bond with all types of animals.

Blue is survived by his wife Linda Dalley of Arco, ID and his children Nick (Jody) Dalley of IdahoFalls, ID, Brian Dalley of Arco, Sandy(Caleb) Maynard of Moore, ID, and Sara (Matt) Perkes of Vacaville, CA, 14 grandkids and 1 great granddaughter due in April. He is preceded in death by his parents, his son Damon Dalley and daughter Angela Dalley Savage, and siblings, Wallace, Alvin, Darrell, Marvin, Nellene, and Ed.Funeral Services will be 11:00 am, Saturday, March 2, 2019 at the Anderson Family Funeral Home. A viewing will be Friday, from 5:00 to 7:00 pm at the funeral home and one hour prior to the service. Interment will be in the Driggs Cemetery.