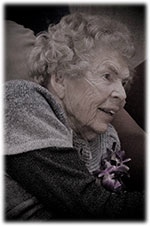 Elida Sorensen Pearson passed away the evening of November 18, 2018. She was born to Willard Harvig Sorensen and Margaret LeNora Jensen on March 24, 1918 in Moore, Idaho. Elida married Rodney Alma Pearson on December 12, 1940 in the Church of Latter Day Saints Temple in Logan, Utah. She celebrated her 100th birthday with family and friends in March of this year.

Elida was preceded in death by her parents, her husband Rodney A., her son Rodney S. and a grandson Kent Burnett. She is survived by her daughters; Sandra (Boyd) Burnett and Kathleen (Rick) Cooper. Her sons; Robin Roy (Robin A.) Pearson, Kim Alma (Jennifer) Pearson and Douglas Alma (Jody) Pearson. She also leaves behind 32 grandchildren, 85 great grandchildren, and 9 great great grandchildren.

Elida was a member of the Church of Jesus Christ of Latter-day Saints. She found great joy in serving in many ways in her church and the community. Her greatest joys came from her family of which there were many! Her presence and all she shared with each of us will be greatly missed.

A funeral service was held Saturday, November 24, 2018 to honor her life. Interment was in the Lost River Cemetery under the direction of the Anderson Family Funeral Home.